Let me introduce you to A.  He’s beginning his teaching career in North Philadelphia, where his students tend to micro-greens in the back of his classroom and participate in “real world learning” both in his math class and during weekly career-exploration field trips.  A’s students are becoming spreadsheet champions (I think we could all take a sheet out of their workbooks on building a “line of best fit” from a scatterplot in Google Sheets!)  But this post isn’t only about A, it’s also about the future of his students’ neighborhood, Sharswood.  (Visit link for in-depth reporting.)

As part of their learning, A’s students have studied population patterns in their neighborhood, beginning with trends in their own family tree (does your family get bigger or smaller with each passing generation?) and making projections based on their family history to predict growth rates for the future (and learn some algebra along the way).

Now, they are beginning a study of renewable energy projections – a project that will require a best-guess figure for the number of people using electricity in the neighborhood several decades out from today.  The problem?  The rate of population change has reached an inflection point (after years of decline, the Philadelphia population has stabilized and begun to grow).  Given that, we can’t really rely on the past rate of change to predict the future. 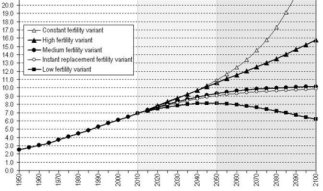 On a macro (think: global) scale, there are lots of theories for predicting population, mostly focusing on birth rate, death rate, life expectancy, and rate of replacement.  Some models also take into account environmental and economic conditions.  This chart shows how different theories and assumptions play out when predicting population out to year 2100.

How many siblings in the City of Brother Love?

While there are some fascinating math concepts behind the scenes of those projections, ultimately, the global population doesn’t have a whole lot of bearing on Philadelphia, let alone a small neighborhood in North Philly.  Zeroing in on city-by-city projections, I discovered a few key findings:

Making these projections is a big business because investors can use population growth metrics to predict real estate, market changes, and, in general, make a lot of money.  There are potentially hundreds of different formulas and conflicting answers, but I especially liked the clarity of this methodology for predicting American city growth rates.  These analysts predict that Philadelphia will grow at a rate of 4.5% between 2010 and 2030, dropping down from the 7th largest American metropolitan area to the 9th.

But what about at a neighborhood level?

Neighborhood growth is uniquely hard to predict – even taking into consideration Philadelphia’s overall growth rate, there is a tapestry of inter-neighborhood migration, gentrification, housing development, housing decline, etc to consider.  As Fishtown’s population swells, what does that mean for Port Richmond?  As Kensington’s opioid crisis accelerates, what will happen to Juniata?  In the case of A’s school and the surrounding neighborhood of Sharswood, sandwiched between Strawberry Mansion, Brewerytown, Fairmount and Fraincisville, your guess is as good as the Philadelphia Housing Authority, Philly real estate developers… or local math students.

Making our own predictions

A’s students went to work making their own population predictions.  First, they compared the 2010 census figures to the 2000 figures in the neighborhood surrounding their school to find the percent growth rate.  Getting these data is no small feat – even those of us who are super civicly-oriented probably don’t know the name of our Census tract!

To find the population statistics, A. navigated to www.factfinder.census.gov and used their Advanced Search function to narrow the data down to just Pennsylvania, and further, down to just Philadelphia.  Then, he used the Geographies feature to access the Map View.  From there, you can create shapes on top of the map and the application will show you which Census blocks or tracts are selected.  It’s a cumbersome process, but it gets the job done.

No one said it would be easy to predict the future!  Since the neighborhoods surrounding Sharswood are growing faster than Sharswood itself, A and his students took the average of Brewerytown’s growth rate and Philadelphia’s growth rate (slower than Brewerytown, but still positive) to make a guess at what Sharswood’s growth rate might be.  When they finished their arithmetic, the value they came up with was .0473 (in percent form, 4.73% growth).

Then, they used the A = Pert  formula to predict population (link has a thorough and accessible explanation of the growth rate formula), and created growth charts in Google Drive (we’ll have to save that lesson for another post!)  Here’s how they plugged numbers into the equation:

*By the way, did you know e is named by/after the same mathematician who created Euler diagrams / Venn Diagrams?  That fact made this nerd VERY happy.

My original plan for this blogpost was to feature some student-created graphs and charts, but we decided that gaining permission for that might become a bit complicated, so I went in a different direction to discuss the implications of population projections (and of course there are even more implications that I didn’t even get to cover!) – and then how to recreate our steps.

Why should changemakers care about this story?  Well, first of all, if you live in Philadelphia, I highly recommend reading up on the PHA re-development project in Sharswood.  I find some parts of it inspiring and other parts terrifying — you should read for yourself and come to your own conclusions.  Second of all, stories like this are exciting to me because instead of throwing his hands up in the air and thinking “well, we can’t predict population growth if the future trends diverge from the past!” A. buckled down to dig into census data, made a reasonable guess about averaging growth rates, and plugged numbers into an established formula for predicting growth rates.  That’s the kind of thinking that I want to foster in my peer group and among TDAA readers.  Just because it hasn’t been done, or the technology isn’t quite working properly, doesn’t mean that we can’t find a way!  If we believe that we can influence policy, politicians and corporations, surely we can also make meaning out of data.  Finally, if WE can do it, so can YOU!

I work as a Salesforce system administrator and declarative developer for a philanthropic foundation and I organize for social justice with EQAT's Power Local Green Jobs campaign in Philadelphia. When I am not working, organizing and data wrangling, I am a prolific knitter. I am opinionated about potlucks, philanthropy, public transit, social movement strategy and gender equity. I fantasize about getting around on a motor scooter. www.pronoun.is/she. View all posts by Samantha Shain

One thought on “Predicting the future”